THE CONTEST IS OVER! THANKS FOR ENTERING!

I’m excited to be one of eight authors sponsoring a giveaway just in time for the holiday season. While you run around shopping for gifts, preparing yummy foods, wrapping presents, and getting into the holiday spirit, treat yourself with a chance to win thirteen YA e-books, running the gamut from fantasy to paranormal to suspense to sci-fi and more. The same winner will also take home a pair of Storiarts writing gloves featuring text and images from Laini Taylor’s fantastical book Strange the Dreamer! The e-books you could win include:

To enter, follow the links in the Rafflecopter to sign up for each sponsoring author’s newsletter individually. Earn bonus entries by following the authors on Amazon and/or Bookbub or by Tweeting a message, the latter of which you can do once a day during the contest’s entry period.

This contest is open internationally from December 1st through December 14th, 2018. One winner will be chosen via Rafflecopter’s random selection process. After being contacted with the news that they’ve won, the winner must provide their shipping address to receive the writing gloves and e-mail address to receive the e-books. Storiarts is not a sponsor of this contest. Information collected for newsletter sign-ups will never be used for any other reason other than sending newsletters. Unsubscribe individually from newsletters at any time.

Once upon a time is eternal…

Turn the pages and fall into the enchanting worlds of beloved, age-old fairy tales made new again in this fifteen-story collection from Snowy Wings Publishing.

A girl with long, long hair is trapped in an attic, ensnared by promises of immortality, the radio her only companion. An android wants to believe in her life, that the feelings she has are real—and that she might be just as beautiful as her famous stepsister. A gamer must save her true love from the mysterious, dark entity that has ensnared him in their MMORPG. A modern teen is lured to the fantastical Land of the Dolls, and only her own cunning can help her escape. These are just a few of the bewitching tales found within Magic at Midnight.

From sci-fi to fantasy, contemporary to historical, paranormal and more, there’s a fairy tale retelling in this collection for every reader. Featuring stories from bestselling and award-winning YA authors as well as emerging voices, this anthology will take you to distant worlds and back again—all just familiar enough to make you feel at home.

The first book in my new series is now available! Free on Kindle Unlimited, the Kindle version is only 99 cents for purchase through May 7th only.

Paperbacks are trickling into major outlets. They’re up on Amazon and Barnes & Noble right now. You can also order a signed paperback copy direct from Snowy Wings Publishing! If you don’t see it at your favorite retailer, ask for it by name. They should be able to order it for you soon!

Here’s what some readers are saying:

“I devoured this first installment quickly, and I look forward to more in the future… McNulty does a superb job with this speculative fiction, raising questions about allegiance and making the choices best for yourself or those you care about. It will grip you and keep you wanting more.”

“This particular author likes to throw out little nuggets of truth mixed in with misdirection so you think you have the story predicted, and you THINK you have the characters down, but really you know nothing! LOL I can’t wait for book 2!!”

“All the characters were fantastically written… Left with so many questions and shocking details I can’t wait for the next book in the series. This one was so good, if I wasn’t so busy I could have read it in one sitting.”

The final book in Melissa Giorgio‘s Smoke and Mirrors fantasy series is out in May–and today’s the reveal of this gorgeous cover! *-*

The unthinkable has happened: A dragon was slain, her death used to free the three most powerful and dangerous magicians in the world, and Irina was powerless to stop it. Now she must pick up the broken pieces and prepare for a battle she seems destined to lose.

But all is not lost.

Hope comes in the form of Nerine, a girl from a faraway land, and her army of dragons. Irina and Nerine know the only way to win this is to work together by uniting their ragtag team of friends, which is easier said than done. Tensions flare, dark secrets from their pasts are revealed, and tears are shed as the heroes struggle to put aside their differences and decide on their next course of action.

The road forward is not easy. In Irina’s most dangerous adventure yet, she travels to lands both new and familiar, learning to accept the fledging magic that’s inside of her. In a race against time, with more than one life at stake, failure is not an option.

When the curtain falls on the final Smoke and Mirrors book, who will be left to take a bow?

Need to start with Book 1? Click here to buy!

Today’s the day! Irina’s story continues in THE WHISPERING ECHOES, the third full length novel in the SMOKE AND MIRRORS series!

I’ve been pretty quiet about this book because I don’t want to spoil anything, especially for those of you that haven’t read the earlier books. But I can say that I enjoyed writing this one and as of right now, it’s probably my favorite in the series. It’s crazy how different this book is from what I originally planned. And that’s mostly thanks to BY THE MORNING LIGHT. (Have you read that yet? If not, I strongly suggest reading it BEFORE you dive into THE WHISPERING ECHOES!) I love Claudette and Emile, and I’m so happy they were able to join Irina on her journey.

I really hope you enjoy this one!

A few years ago, I started a tradition of listing all of the books I’ve read (not including manga or graphic novels, of which I’ve read a lot!) as a sort of memento of the fictional worlds I’ve been to throughout the year. I don’t keep my Goodreads profile updated with all of these reads because I don’t feel right doling out public criticisms of books as an author myself. This year, I decided to include the client books I’ve read as well (but only revealing the names of the books that have been announced, of course) because they should certainly count toward my total!

I know there are a few days left in the year, but I’m only halfway through a long book, so I won’t be reading any others!

Before I start,a  question to you all, are my reviews too short? 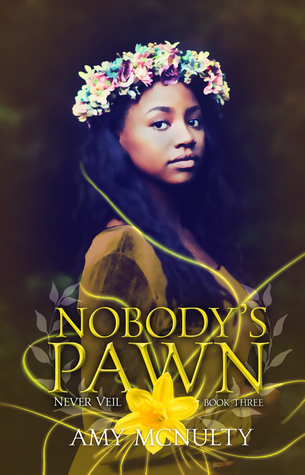 I received an ARC from the author in exchange for an honest review.

Men can love, but they can also hate. Noll knows too well that the men in her village have adjusted poorly to the freedom of their hearts, but she hopes to bring peace back to her community. With the lord’s return, Noll feels confident that together, they can work to settle down the villagers, but in his rebirth, he remembers only one thing about her: that she caused the curse that tortured him for a millennium in the first place.
Determined to start anew, Noll must accept that, romantically, she and the lord are better without one…

I’m excited to finally reveal the new covers for The Never Veil Series books and to announce that the e-books for the first two are back up for sale. (Watch for them at B&N and Kobo soon.) Nobody’s Pawn is also available for pre-order! (The paperback will be available soon.)

Credit goes all to  Meet Cute Photography for the amazing photo shoot and Makeready Designs for putting it all together!

In addition to the upcoming release of FALL FAR FROM THE TREE (September 6th–buy the paperback today!), I’m releasing a novelette Friday, September 9th! (What’s a novelette? It’s longer than a short story and shorter than a novella.) This Amazon-exclusive title will be available for only 99 cents or for free through Kindle Unlimited.

Bookmark to read after release for free on Kindle Unlimited or pre-order for only 99 cents!

A woman with shoulder bones as sharp as an eagle’s talons—bones almost protruding from her skin—opens her mouth as wide as it’ll go, impossibly wide, consuming the pill that takes both of her arms to cradle. The nourishment makes her thin stomach pop out like she’s pregnant with a child so large it’ll burst through her stomach. She swallows slowly and licks her lips. Her eyes search around hungrily for more.

That dream again.
Josie is skilled at her job as an “unfortunate” who inhabits the bodies of her clients to perform their work while they sleep, but her coworkers’ cruel jealousy over her success leads to her enslavement and the loss of her dream-worker status. A YA sci-fi reimagining of the tale of Jacob’s favorite son Joseph, his dreams, and his famous coat.

A novelette by the author of The Never Veil Series and Fall Far from the Tree.