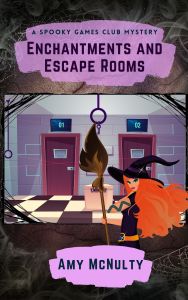 After the disaster of the month before, Dahlia Poplar, cursed witch and helper extraordinaire, is ready for her serene, supernatural small town life to return to normal. However, her hopes for a more peaceful existence don’t last when a childhood friend moves back to Luna Lane to open up an escape room.

With the Spooky Games Club thriving, Dahlia decides to help her friend by using her magic to quickly get his business up and running. Dahlia’s enchantments accomplish the task, but before the Games Club has a chance to enjoy the new attraction, a test of the escape room results in a freak, fatal accident. Riddled with guilt, Dahlia wonders where her enchantments went wrong—or if there’s something more to the disaster.

The only way to divine whether or not the death was her fault, the result of an accident, or murder is to investigate—and perhaps even play the dangerous game herself. In this one-hour escape room, failure to escape could mean death, not just for Dahlia, but for those she holds most dear.