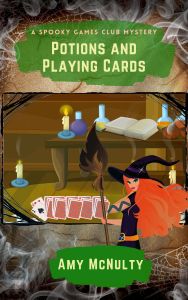 Fixated on researching ways to break her curse once and for all, jinxed witch and do-gooder Dahlia Poplar doesn’t know how well she’ll do in the upcoming Euchre Tournament, the Luna Lane Spooky Games Club’s first sponsored event. With visiting professor Cable Woodward due to depart to spend more of his sabbatical on the road, Dahlia can’t admit that he may be the reason she’s so determined to finally leave behind the cozy comforts of home.

Unfortunately, her efforts stir up unwanted attention from the one who cursed Dahlia to begin with, the evil witch whose shadow has loomed over all of the dreadful events in Luna Lane. When the tournament ends prematurely, there’s a body charred to ashes, and Dahlia takes it upon herself to figure out if the wicked witch is behind the disaster. Somehow, she needs to brew the right potion to break her curse while solving the paranormal message encoded in the club’s playing cards, all while keeping her loved ones safe.

Her very life may be the ante she risks to get to the bottom of everything that’s been plaguing her since birth—and if she can’t bluff her way to winning, Dahlia Poplar may prove to be the dead card that’s no longer in play.