Skip to content
I wanted to give a shout-out to some epic-sounding Entangled Embrace releases largely because Suzanne van Rooyen is one of my online author friends and her book sounds incredible!

This month Embrace has something for everyone! Whether you want the glamour of Hollywood, the intensity of saving the world, or a m/m scifi adventure you’re sure to find love in all the right places.

Since their last battle, life for the Mortal Machine—the secret-society that protects Earth and its inhabitants from dark outside forces—has become almost…normal. For everyone but Addison. The evil she’s imprisoned in her soul has begun eating away at her sanity, and despite her soul mate Asher’s efforts to hold her together, it’s causing painful and terrifying delusions.
Consequently, nobody believes Addison’s warnings that Marcus, their old enemy, has returned. When Marcus threatens Asher and the Machine, she agrees to find what he seeks—a treasure that, in his hands, could be deadly.
If she relies too much on Asher, she knows he’ll likely imprison her, if only to preserve what’s left of her deteriorating mind. But if she fails this final test, Earth will fall. So Addison is forced to distance herself from her love, to prevent the life she wants with Asher from being over before it truly begins.
Find your copy of FOREVER DUSK:
Amazon | B&N | iTunes | Kobo | Entangled | Goodreads
○ ○ ○ ○ ○ ○ ○
Scardust by Suzanne van Rooyen 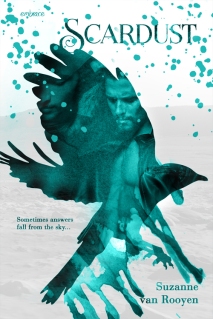 Dead Rock, Texas, 2037
Raleigh Williams made a promise to his brother before he died, that he’d scatter his ashes on Mars. Desperate to leave a life of bad memories behind and start over in the Martian colony, Raleigh fully intends to keep that promise. But his plans are thwarted when a meteor near-misses him in the desert, and Raleigh finds in its crater not debris or even a spacecraft, but a man covered in swirling scars and with no memory of who he is. At least he looks like a man—a man Raleigh can’t seem to keep his eyes off of—but whenever they touch it ignites a memory swap between them.
Raleigh agrees to help Meteor Man piece together his life through their cosmic connection. But the memory share goes both ways, and Raleigh becomes inexplicably entangled with a guy who is everything he needs—everything good that Raleigh is not—but might not even be human. As their minds and worlds collide, reality unravels and Raleigh must face a painful truth, one that could shatter his dreams of finding love, reaching Mars, and fulfilling his brother’s last wish.

Most girls would kill for the opportunity to work for Jack McAlister, Hollywood’s hottest actor, but twenty-one-year-old Jessica Beckett is ready to kick him out of her red Ford Fiesta and never look back. She should be spending her junior year in France, eating pastries and sharpening her foreign language skills. Instead she’s reluctantly working as Jack’s personal assistant, thanks to her powerhouse talent agent aunt.
Jack is private, prickly, and downright condescending. Jessica pushes his buttons—she’s not the type of girl to swoon over celebrity heartthrobs, precisely why her aunt thought she’d be perfect for the job—and Jack pushes right back.
But as she begins to peel away his layers, Jessica is shocked to find she craves her boss’s easy smile and sexy blue eyes. The problem is, so does the entire female population. And what started out as the job from hell soon has Jess wondering if a guy like Jack could ever find love with a regular girl like her.

Find your copy of BEYOND THE STARS:
Amazon | B&N | iTunes | Kobo | Entangled | Goodreads