I apologize for neglecting my blog a bit lately; I’ve been on a roll creatively and am trying to get one of the WIPs’ first draft done within the next few weeks, if possible. But I thought I’d stop by and talk about a few more books I loved in high school.

This was another required reading, I think for my AP English course. I remember that we strangely got to take TWO WEEKS out of regular class to watch the miniseries during school, too. (And that actually our history teacher of all people was vying to be allowed to show it in her class instead, but the English teacher won out since we could actually read and discuss the book…) It wasn’t this welcome break that made me love it, though, although I loved the Jeremy Irons adaptation for the most part; it was one of my first forays into period fiction (I didn’t grow to love Austen and the Brontes until college and post-college… Granted, those are much earlier periods, but still…), and I loved the characters, and the journey the protagonist goes on, although I remember not really being too happy with the ending for personal reasons. But not all books end the way you want them to.

The story follows Oxford student Charles Ryder first through his close (close, like really close!) relationship with a spoiled, haughty, carefree rich kid, Sebastian Flyte. Sebastian is a jerk, but his laissez-faire attitude is of course masking deeper problems, and Charles begins to see another side of his friend-maybe-lover. The two part, Sebastian off to drink himself into ruin, and Charles entering into an unhappy marriage. The latter half of the book features a middle aged Charles returning to Sebastian’s family home (which is named Brideshead, thus “revisited”…) and becoming closer friends with Sebastian’s sister Julia, who’s also in an unhappy marriage. The two become lovers on the cusp of World War II and hope to one day wed…

That’s just the bare bones of the plot. There’s also an important theme about faith that resonated with me and led to the aforementioned ending I wasn’t sure was what I expected or wanted for the character, but that’s just me. It’s still a great read. 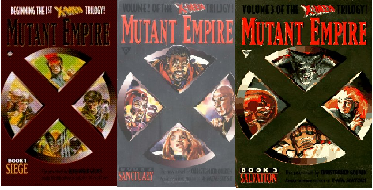 Not every book I read and loved in high school could pass for required school reading, of course. When I was 11 or 12, my sister showed me the ’90s Fox X-Men cartoon and I joined in her in her obsession for that soap-opera-with-superpowers that is the X-Men franchise, which opened the gate to my overall love for superhero comics, movies and cartoons that’s still with me today. (An aside: The ’90s animated Batman is THE best version of The Dark Knight, I swear!) Part of the way I got my superhero fix between waiting for the latest issues and episodes was reading a bunch of Marvel superhero books coming out at the time. I loved a number of them, but the X-Men: Mutant Empire trilogy was my favorite, hands-down, and I’ve re-read them a few times since I first read them as a teen.

These books follow the X-Men at what was the height of the series to me, the Blue and Gold Teams in the ’90s. Cyclops’ Blue Team was off in space helping his father space-pirate Corsair deal with some intergalactic problems (meh, my least favorite part of the trilogy, but Cyclops has always bugged me…) and Storm’s Gold Team was dealing with Magneto’s takeover of Manhattan to serve as a home for mutants. Magneto managed to reconfigure Sentinel robots to attack humans instead of mutants, so only mutants could get in on the ground and take him out. This was a much more tangible kind of crisis against Magneto versus what I’d seen in the comics or cartoon, with the made-up island of Genosha or Asteroid M acting as Magneto’s havens.

By the way, I was reading these books when an English teacher asked what I was reading in my free time, to “prove” I was an avid reader… Which didn’t score me too many brownie points! She didn’t know what I was talking about, so I had to explain that I read a lot of franchise books like Star Wars books (at the time–haven’t touched those in over a decade)… At least she’d heard of that! Ah, well, read what you love, I say!

“Most people just don’t care that much, Amy….”

I heard that from my boyfriend the other day. No, we weren’t discussing anything of import at the time (although the quote sadly applies to those topics, too). I was in the middle of another ranting geek fit that my boyfriend puts up with. (He’s a geek, too, but since I’m the one who drags him to conventions, and I have a love for superhero comics that he simply has never shared, perhaps I flatter myself to be slightly more geeky.) The penultimate episode of Game of Thrones season two had aired, and I was telling him about some of the reactions I read online. Many people feared something had happened to a beloved character… And I knew almost as soon as I became a fan of the series what that character’s entire future (thus far) would be. Hadn’t they read the books? Or at least Googled info? It’s been online probably since the days of dial-up. I didn’t even start watching Game of Thrones until this past March, and I didn’t pick up the books until shortly thereafter. I wasn’t one of the fans who knew for years and years, but still, once I was interested enough in the series, I was dying to know more, and I devoured almost anything I could find on the topic.

I had a similar geek fit earlier this year towards the end of the second season of The Walking Dead. My own friends were the culprit this time, shocked and confounded by what happened on the screen! Meanwhile, almost as soon as I liked the TV series (a year later than most), I picked up all of the graphic novels and devoured them in a matter of a week. True, the series differentiates quite a lot from the original source material, but the particular event in question is something I braced for from the start… Seeing as how it happened almost at the start in the comics.

It could simply be a matter of time, and the fact that when you earn some free time, it’s far easier to veg out in front of a screen that does all of the entertaining for you. Sometimes going back to the source material is a pretty big commitment. (I’m now week six-ish into my vow to read all of A Song of Ice and Fire, and I’m only about 3/4 through the second book… By the way, I bet you didn’t know that’s what the Game of Thrones series is actually called, if you’re among those not interested in the source material!) Other people want to be surprised as they watch the movie/series, and they consider the originals sources of “spoilers.” (Me, on the other hand–I’ll look up spoilers before I even get that far in the reading, although I am getting better at fighting that urge…) I get it, I get that I’m probably just too much of a geek, but I can’t imagine loving a movie or a series, finding out it’s based on books, comics or even a video game, and not wanting to immerse myself further!

…And yes, I know, I probably just need to chill.

Do you read the book/comic first or are you inspired to read something after seeing an on-screen adaptation? Do you ever love a movie or TV show, learn that there are source materials and just not have the urge to check out more? (I’m looking at you, millions and millions of Avengers movie fans!)